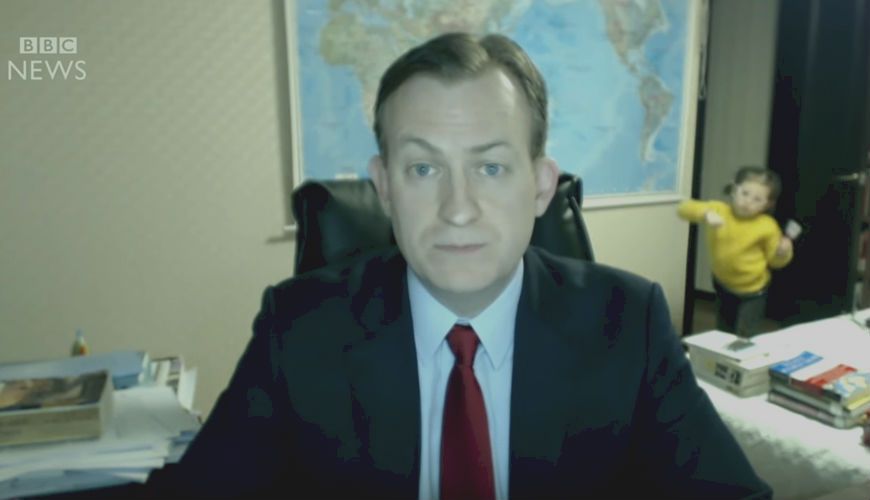 I hear you, fella. I’ve been there. Admittedly not on live TV in front of many thousands of hysterical viewers, but let’s call it a potato/potato situation. Much as we like to think that our homes can double up as professional spaces, life does tend to get in the way, and when it does, it appears relentless in its bid to diminish any vestige of respect you may previously have held.

Now, my hatred of video conferencing (and personal interaction in general) has been extensively documented, both because it requires one to pay attention to personal appearance, and because it means having to reveal the reality of your workspace in all its ramshackle glory.

The simple fact is that I feel no apparent need for the typical tools bestowed upon office workers. If I wanted endless quantities of useless stationery and a smattering of sad little pot plants I’d have kept my old office job. Give me a posturepedic pillow and a pair of comfy pyjamas anyday.

However, I find that clients are often less than charmed when you’re beamed into their boardroom from the comfort of your bed, looking a little like you’ve been dragged through a bush backwards. While they might be willing to tolerate your unconventional ‘office-free’ stance on life (although many continually enquire as to the whereabouts of the office as if they can’t quite believe your original answer), they still for some reason require you to appear professional when interacting with them, if for no other reason than to reassure them that they haven’t signed away their marketing budget to some small town chop shop.

So you go through the motions. You transform your dining room table into a makeshift desk. You scatter a few notebooks and flash drives about (that’s what people have on their desks right?). And you don the dreaded collared shirt (and trousers people, don’t ever underestimate the power of mirrors to unravel your carefully calculated bottom-free plan).

And juuuuuuuust when you think you’ve got the illusion taped, everything falls apart. Poor Robert Kelly for example, had planned extensively for his upcoming interview, and felt pretty safe in the understanding that he’d be able to lounge around on the couch in a couple of minute’s time. After all, the kids only needed to be quiet for one minute.

Naturally, as will happen when you have kids, those plans quickly went South. And the rest is history.

Typically, it’s in the midst of the most important interactions that these types of things happen. A dog wanders in. The geyser bursts. Your mother pops in for an unexpected visit, repeatedly uttering the words ‘I’m not here’, despite it being blatantly untrue, and made no less obvious by her relentless rummaging through your kitchen cupboards, now in full view of a panel of confused clients.

It’s at this point that you either need to cut your losses and plead technical difficulties, or do your best to convince your clients that you are taking part in some sort of charitable initiative that involves caring for demented citizens. Either way, the likelihood of them ever seeing you as a professional big-hitter worthy of their funding is slim.

Luckily for you, some of us have learnt the hard way so you don’t have to. Clients have seen me run around hysterically trying to stop a fire. They’ve witnessed parts of my lower body never intended for public scrutiny. Don’t ever let that happen to you. Here are a few tips to avoid this type of faux-pas in future: