Diaries of a Barefoot Businessman Chapter 32: The PowerPoint Predicament 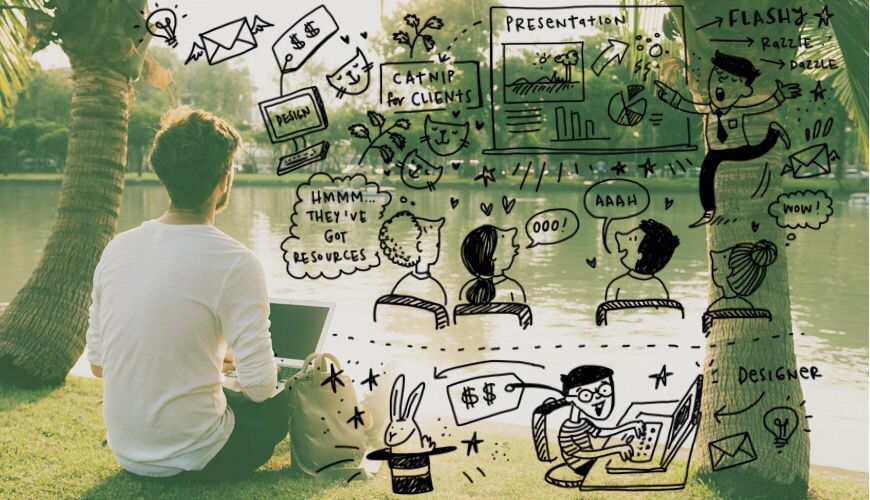 For anyone with even a passing interest in earning a decent living, there are a few critical skills with which one must be somewhat familiar: the ability to create and respond to emails, the basic capacity to cobble together a document of sorts and the wherewithal to make a presentation look pretty.

Now I’d say I’ve mastered the first two. Hell, I have even been known to rock an Excel spreadsheet or two in my day (multiplication and addition only). But when it comes to the art of presenting information in a visually palatable form, my ineptitude is of the very highest order.

One might suppose this not to be a problem for a person whose day-to-day undertakings seldom require a venture into the world of visual arts. Yet you’d be surprised how often such things are required – be they for prospective clients, existing clients or partner agencies – and how much professional cachet they actually carry.

I’ve always been a firm believer in the substance over style school of thought, in the ability of sensible words and sound arguments to trump the allure of the aesthetic. When watching other more established agencies put on slideshows featuring cleverly constructed graphics, reveals and all kinds of in-built tech that my Grade 9 expertise could barely fathom, I consoled myself with the knowledge that it meant nothing, that it was simply unnecessary bluster.

Yet it is exactly said bluster that acts as a mysterious form of client catnip, inducing knowing nods and smiles even in spite of a relative lack of substance. You see, to a prospective (or paying) client, it shows that there is a dearth of available resources – a team burrowing away in the back offices, able and willing to cobble together great presentations at the drop of a hat.

Is it necessary? No. Does anyone actually want to sit through 67 slides, all of which essentially say the same thing, marveling at the handiwork of poor interns who were no doubt chained to their desks for hours on end so as to create this masterpiece? I’m guessing not so much.

Yet what anyone tasked with giving you money that could perhaps be better spent elsewhere wants to know is what you CAN do, pointless an exercise as it might be. Your brief and mercifully coherent slides might save everyone time and get to the point a lost faster, but they also suggest (correctly in this case) that you’re some sort of hapless one-man-show, one unable to rely on a slew of minions to adhere to your random whims.

So what’s a businessman to do? Put someone on your payroll to whip up dazzling presentations at the drop of a hat, simply so you can make your clients feel better about paying you (essentially wasting money simply so as to prove you can)? Do you take a night course in PowerPoint management and try your best to elevate your own expertise? Or do you simply own your ineptitude and make it a part of your charm?

Let me tell you why I’m leaning toward the latter option.

Firstly, I don’t have the financial arsenal at my disposal to simply hire someone to make a (power) point. Granted, there are occasions befitting some sort of financial investment – new business pitches for example, when you have little time to catch someone’s attention – but by and large, what needs to be said can be done so with very little budget behind it.

Secondly, I feel much about this as I do about the concept of a physical office. Sure, it’s nice to have. Yes, clients are going to throw you the odd ‘ooh’ and ‘aah’ when you walk them through your well decorated halls. But what are you left with at the end of the day? More space to manage, less money to pay your employees and a big fat whopping bill at the end of the month to rub salt in the wounds.

Ultimately, it’s important to remember that it’s what you say at the end of the day that is going to make or break any client relationship, rather than the way in which you say it. Sure, you might feel a bit sheepish when asked to present in meetings with fellow, minion-filled agencies. Yes, your client may wish you were more visually gifted from time to time. But if anyone feels a lack of PowerPoint prowess is cause for a breaking of ties, you’ll have to ask yourself whether that relationship was worth it to begin with.

So, in conclusion, yes, it might be worth YouTubing a few handy guides on how to jazz up your presentations. But is it worth doing so at the expense of actual work? Absolutely not. One day, you’ll have the hands on deck you need to accomplish such frivolity. But in order to reach that corporate zenith, it’s vital that you don’t waste your time fretting over things that are ultimately inconsequential.