Diaries of a Barefoot Businessman Chapter 8: Battle of the Bandwidth 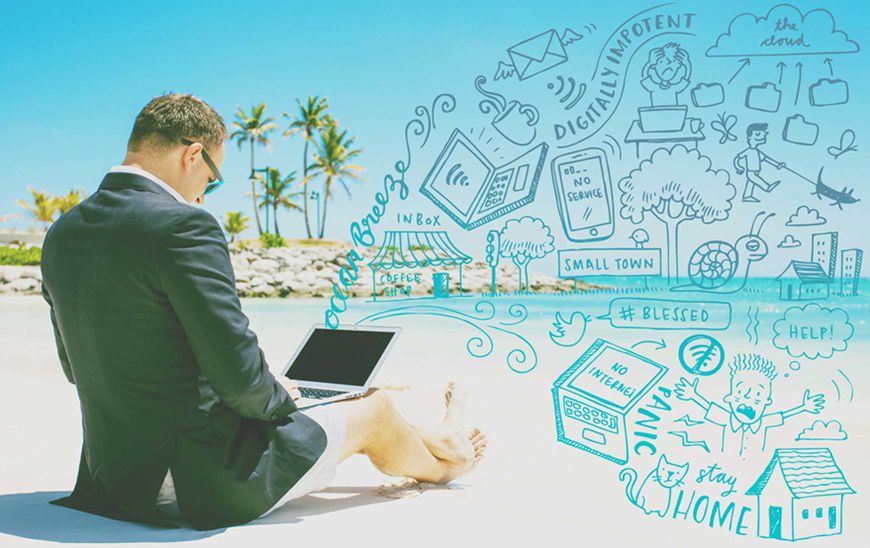 Having the flexibility to work from anywhere is a wonderful thing. It allows you to soak in an ocean breeze as you tinker around in your inbox, or ogle at the weird and wonderful (presumably unemployed) people, who roam the streets while others support the economy.

But it only takes one connectivity-related crisis to remind you that this freedom is a fragile thing. On a recent misguided mission to a sleepy seaside town in search of some work-life balance (in itself a misguided concept), I was reminded that not all places are created equal when it comes to connectivity.

Naturally, this reminder was issued on the day that six new campaigns were set to launch. Not the day I set aside to weep as I collated my taxes. Or the one I’d flagged for ‘miscellaneous admin’ that required little more than consciousness to achieve. Because where would the fun be in that?

Armed with hours of blissful seaside sleep, I set out to face the impending tsunami of deadlines with plenty of mental fortitude, setting up camp in a surprisingly sophisticated coffee shop and feeling generally smug about life. Hell, I even fired off a series of those obnoxious #Blessed tweets. Life was good. Coffee was good. I was good to go.

But while the coffee shop might have ticked all the hipster-friendly city boxes, the town’s infrastructure sadly wasn’t a patch on its more urban counterparts. Let me rephrase that. There was no Internet. No wifi. No phone signal. The ENTIRE TOWN had gone off the grid, courtesy of a windstorm that had impolitely dislodged a power generator.

Now I hardly need to express the fact that this was a somewhat less than ideal situation. Sales were about to take place without anyone knowing. Events were poised to go ahead without anyone in attendance. And the closest town was an hour away. To say I went the colour of a freshly pressed cotton sheet is an understatement. And I couldn’t even delete those tweets. Basically, I was a digitally impotent idiot.

Naturally the temptation to pull a ‘dog ate my homework’ move was strong. Could I just vanish into digital obscurity and hope nobody noticed? Naturally I couldn’t TELL my clients this. Cue eye rolls and laments of ‘there he goes again wasting our money.’ The whole ‘I’m taking a break from city life’ concept seems a whole lot less cute when you can’t get the work done.

Thankfully, five panic attacks and seventeen frantic calls to the power suppliers later, order was restored with only minimal damage done. But I can tell you that anxiety looks and tastes the same whether you’re beside the seaside or ensconced in the concrete jungle. And traffic doesn’t seem so bad when you can’t generate any online.

Ultimately, whilst remote working does render the world your playground, too much play can in fact be detrimental to your professional (and mental) health. Holidays and work don’t tend to go particularly well together, and when the two are constantly jostling for pole position, the latter usually wins. And in those instances, the fact that you’re covered in beach sand is actually just annoying.

So before you plot out a series of exotic work trips on your 2017 calendar, you might want to consider the following: