Diaries of a Barefoot Businessman Chapter 7: The distraction dilemma 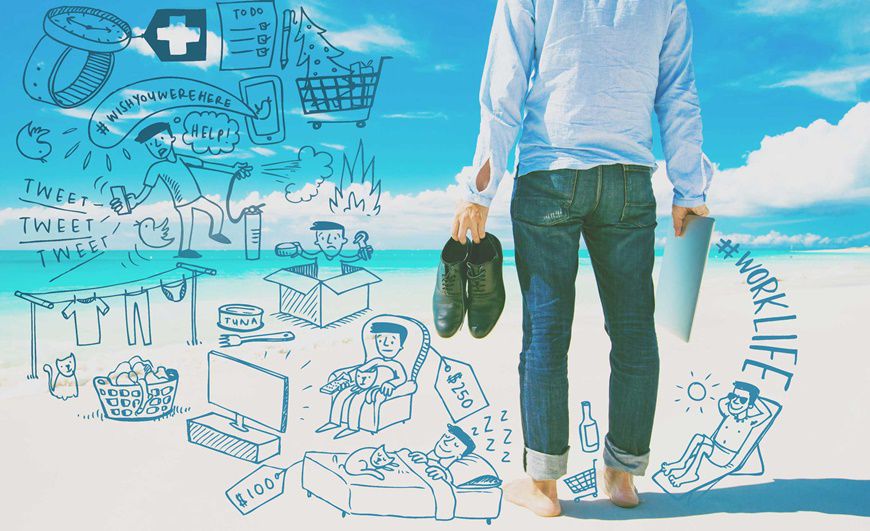 Leisurely swims. Lengthy tanning sessions. Afternoon naps. Extended coffee breaks. These are just a few of the things that people seem to think I do on a daily basis. Yes, to the outsider, the world of a remote worker seems utterly glamorous, affording one access to endless opportunities for carefree pursuits, interspersed with occasional bouts of pesky ‘work stuff’.

Of course, it doesn’t help that the Twitterati and Instagram ‘personalities’ of this world constantly reinforce the concept that life is just one big fat holiday, posting endless snaps of the latest restaurants and most sought-after hotels with unbelievably annoying hashtags like #WorkLife and #WishYouWereHere.

The reality of course is that, unless you’re wielding daddy’s credit card and legitimately consider your job to be a sideline project, there’s really no time to flit about and live it up. I run my days like a Swiss timepiece, waking around the same time as the sun and conscientiously ticking things off my to-do list from the confines of my home office. There’s no TV watching. Hell, there’s not even a radio to keep me company. But try explaining this to someone who’s never tried it.

Somehow, the fact that you actually choose to knuckle down and work despite the plethora of distractions at your disposal is incomprehensible to many. “Oh I’d just watch TV all day,” they say. “But surely there’s time for an afternoon nap?” they ask. Well yes, of course, providing you want to subsist on tinned tuna and live in a cardboard box your entire life.

The reality is that, when you work from home, time is money. You want to sleep in? Sure, that’ll be US$100 less you bring in this month. Can’t tear your eyes away from the latest episode of your favourite soap? That’ll be US$250. When you work out the simple mathematics of what those silly indulgences cost your business every month, you’ll probably be less prone to try them out. After all, nobody’s bank account should ever have to suffer on account of mid-morning TV.

The types of distractions that housebound workers are likelier to have to deal with are in fact those of the more mundane variety. Hanging up laundry. Supervising plumbers. Doing the dishes. Working from home isn’t a delicate balancing act between work and play – it’s a matter of juggling work and, well, other work. If you’ve ever tried to run a live Twitter campaign whilst at the same time attempting to suppress an electrical fire in your garage, well then you know. Yep, try Instagramming that. #WorkLife #YouDontWishYouWereHere

Now just to be clear, the fact that your time is your own to manage is an undeniable blessing. I’m eternally grateful for the fact that I can sneak in a haircut during a break, or reschedule lunch hour so as to accommodate my doctor’s appointment. But despite what others might believe, this is NOT the same as being on holiday.

Yet for people who actually are on holiday – legitimate, paid leave, out of office holiday – you are their de facto plus one, someone who, by virtue of your flexibility, should be expected to accompany them as they do all the things they think you’re already doing on a daily basis.

Constant requests for coffee dates and liquid lunches are standard issue, particularly from parents, who find it incomprehensible that you wouldn’t want to take three hours out of your day to accompany them Christmas shopping. “But you can work tonight?” they say. As someone who is barely able to maintain consciousness after 8pm, this simply isn’t a realistic compromise.

The bottom line is that some people are simply never going to be convinced that you’re making a gainful living, and will remain resolutely forthright in their belief that this ‘work business’ of yours is some clever ruse to extricate yourself from social engagements. But don’t fall for their tricks.

Ultimately, if you want to be afforded the same respect as your office-bound brethren, it’s important not to compromise your schedule under any circumstances. It might be very tempting to ditch the deadlines and meet up with an old friend instead, but as soon as you start to blur the lines between leisure and livelihood, it’ll become ever harder to resist the allure of the daily siesta. And the consequent life of borderline poverty.