Diaries of a Barefoot Businessman Chapter 6: It’s a small world after all 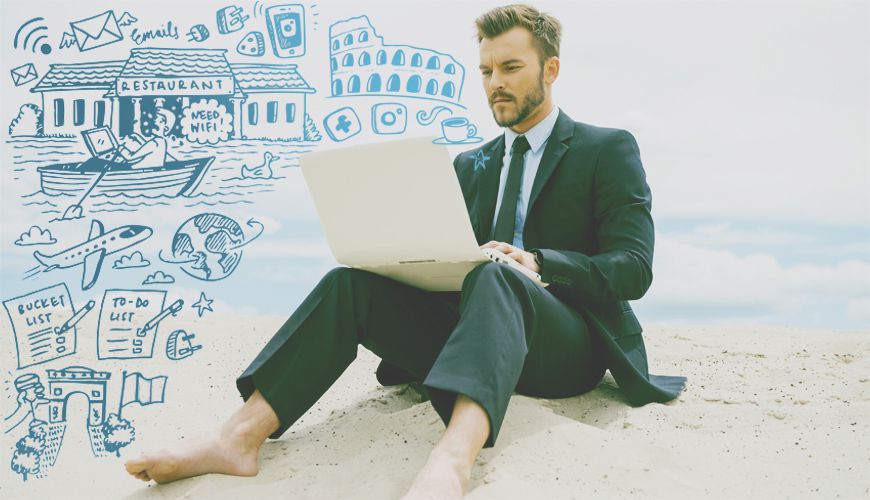 To outsiders bound by the shackles of office imprisonment, the geographical recklessness of entrepreneurship can at times seem like a fairly compelling proposition. After all, who wouldn’t want to conduct their Skype meetings from a coffee shop in Milan, or chase those deadlines whilst watching the sunset in Dubrovnik?

Admittedly, the freedom to set up shop pretty much anywhere in the world is a massive perk afforded to those of us with deskless jobs, enabling us to tick items off both the bucket list and the to-do list concurrently.

But whilst the allure of mixing work and travel is undeniable, it isn’t always quite as idyllic as Instagram would have you believe. Yes, you can sip Chablis on the Champs-Elysées as you go about your business, but if you aren’t able to conjure up a working Internet connection and meet those pressing deadlines, chances are you’re going to return home to a severely depleted client base. And let’s face it, fine wine doesn’t pay for itself.

As such, the reality is somewhat less soothing than you might imagine, and typically involves screeching around unfamiliar streets, begging people with little to no interest in understanding you for basic bandwidth. Add to this the complication of foreign SIM cards, and you’ve got yourself a recipe for a good old-fashioned panic attack. Which, let me assure you, feels the same no matter where in the world you are.

Ultimately, it’s almost impossible to balance the demands of the working day with the basic tenets of a ‘holiday’ – at least not the types you might have had back when you could switch on your out of office for a few weeks. The reality is that the world keeps spinning, no matter where you are in it, and urgent requests and unforeseen mishaps aren’t likely to be neatly scheduled around your day trip to the Colosseum.

You’ll also find that people tend to be a whole lot less forgiving of mistakes when you’re off sunning yourself in some exotic land, which means expectations are twice what they are when you’re mired in a more bog-standard location. “Sorry, I’m just out for cocktails,” isn’t an excuse likely to be well received by people who probably already feel that they’re overpaying for your services.

Then there’s the small matter of time zones. Sure, one or two hours here and there probably isn’t going to have a massive impact on your ability to function, but if you’re looking to venture further afield, you might want to rethink your travel plans.

Having recently attempted to move my office across nine time zones (sure, Sydney sounds like a great place to work), I can attest to the fact that time differences are not for the faint of heart. You see, at the very moment that everyone around you knocks off, your emails start flying at you like a freight train, leaving you to smile awkwardly through dinners and supposedly fun activities while you look anxiously at your phone and try haplessly to solve problems without accidentally activating autocorrect. Not only is this a recipe for heightened anxiety, but it also makes you pretty rubbish company. Suffice to say I’m probably not being invited back.

At the end of the day, it’s important to remember that with great freedom comes added responsibility, and that while working from anywhere can look terribly glamorous, the reality is that there are times when you’ll need to take your laptop out on a paddleboat to try and score WiFi from the restaurant you visited the night before. Yes, this happened.

Is it stressful? You bet. Is it worth it? Absolutely. So while I encourage you to see as much of the world as you possibly can while you have the chance, it’s important to bear the following pointers in mind: