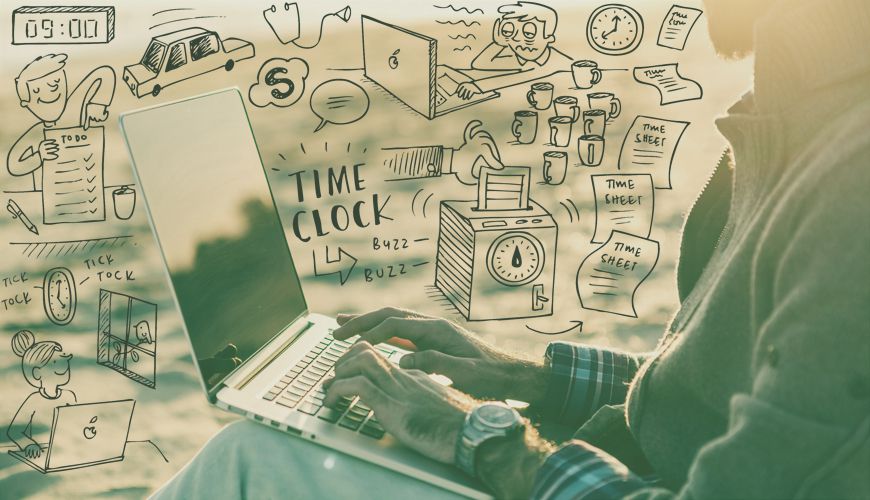 Time is money, or so the old saying goes. And there’s no doubt that those billable hours are indeed the lifeblood of any business. But does time itself hold any real value, particularly if it’s spent trawling through YouTube or Facebook?

Based on the 1984-esque ways in which some businesses today operate, you might be inclined to think so. Despite widespread connectivity and a growing global move towards remote working, many enterprises continue to remain frozen in time, resolute in their conviction that physical attendance trumps all else when it comes to measuring performance and success. Time is money after all.

More and more often, I come across companies whose frazzled employees may as well not bother with rent given the amount of time they’re forced to spend at the office. They’re expected to fill in time sheets daily, and allowed only meagre lunch breaks, which tend to come accompanied by a severe and judgmental look that suggests it might be best to stay hungry.

All this in 2017, when the wonder that is the internet allows us to be connected no matter where we are. When groceries and doctor’s appointments and school runs can easily co-exist with frantic emailing sprees and Skype calls. Yet still there are some who consider physical absence akin to slacking, preferring to have employees tethered to their desks in plain sight, where they can’t get up to mischief or (gasp!) attend to their own lives.

Now, as anyone who’s ever held down a 9-5 knows, the likelihood of filling every working hour with meaningful and productive graft is slimmer than a now-banned French model with a BMI of 12.2. Humans sadly just aren’t wired that way. Much as we’d like to power through each day without distraction, we all get sidetracked, whether it be by coffee breaks, office gossip or a mindless trawl through Facebook. Which is seemingly acceptable, provided it takes place on the company premises.

This approach to business is frankly baffling to me. Surely the main objective of a working day should be to achieve goals, rather than to mindlessly warm a seat? If deadlines are met, does it really matter where, how and why? And does the achievement of said goals somehow attain greater significance when the person responsible is starved, terrified and sleep deprived?

I for one am not in the least concerned about my employees’ whereabouts on a day-to-day basis. Given the fact that time is indeed money, I find it to be a waste of mine to act as some sort of surveillance operative, tracking down the movements of those on my payroll. Would I be pleased if they went off the grid and spent the day in a spa? Probably not. But given that these are adult humans who understand the fact that I pay them to do a job, I trust them to exercise discretion and use their time wisely – something people over the age of 20 should be able to do without supervision.

Maybe I’m too trusting. But, as I see it, we all work differently. I, for one, am at my best before dawn, having achieved 90% of my daily goals before 9am. For others, night time is when they flourish. So what good would it be for me to slap them in a chair from 7 to 7, when realistically they’ll only be productive from 4pm onwards? That just sounds like a waste of both my time and theirs’.

Essentially, I’m paying my employees to get the job done, and by forcing them to account for every second they spend doing it, I’m only compromising their output. Have you ever tried filling out a timesheet? They are hateful things that require one to essentially make up your movements, because seriously, who can even remember what they had for lunch let alone what they were up to between 8:45 and 9:15 on a random Tuesday morning? Not me, that’s for sure.

And who cares anyway? Great, so you worked 12 hours last Wednesday, but what did you actually achieve? In my experience, the people with the most impressive time sheets are usually the types who have little else to do but take part in such mundanity, and who can spend vast swathes of time performing tasks that others might take minutes to complete.

Frankly, I want my employees to go faster. I don’t want them spacing out a 2 hour job over the course of 12 so as to score a pat on the back and a severe case of carpel tunnel syndrome. Remember, time is money, but only when it’s put to good use.

So how do you ensure your employees’ are making the most of their time? Here are a few top tips you might want to employ: