Diaries of a Barefoot Businessman Chapter 25: The Problem With Being A People Pleaser 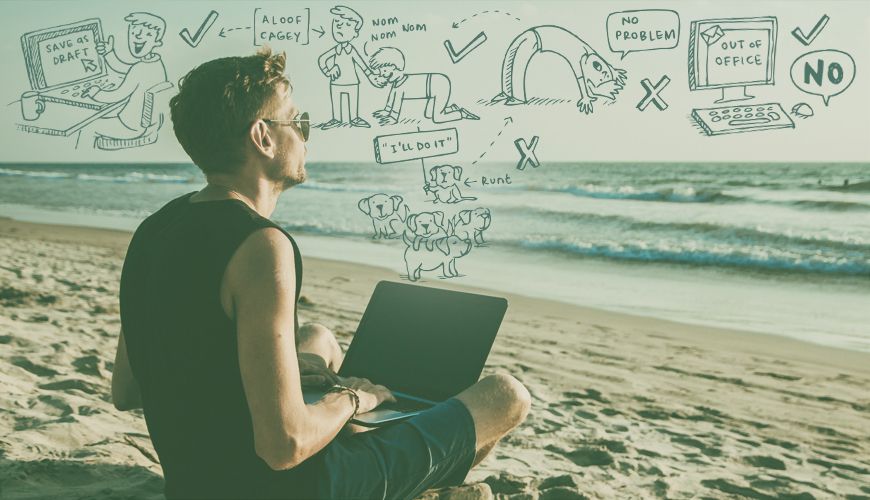 When starting out a business, it’s important to go that extra mile for clients. After all, when your competition comes in the form of established, big-brand conglomerates that command massive sums simply for the privilege of their company, that extra helping of eagerness is pretty much all you have going for you.

Simply put, when you’re hot out the gates, you’re essentially the runt of the litter, and the only way to get ahead is by volunteering for the jobs nobody else wants. So you work weekends. You perform ridiculous tasks that you wouldn’t have been expected to take on as an intern. You man gates at festivals. You pull all-nighters. All for that highly sought-after ‘thank you’ that seldom (if ever) materialises.

Now, naturally there comes a point at which this is no longer feasible. At a certain juncture – once the business cards are printed and the website’s up and running and your staff contingent numbers more than two – it’s time to lay down the law and let people know exactly how your business intends to operate. You haven’t worked this hard to perform tasks that could quite frankly be undertaken by an able-bodied ten-year old after all.

This might sound easy enough in theory, but for someone with a people-pleasing disposition, it’s all but impossible. For those suffering from this serious affliction, the thought of angering anyone causes immense anxiety, rendering them largely incapable of refuting any request.

As a sufferer of said syndrome, I can’t quite pinpoint the root cause. All I know is that when someone makes an outrageous demand, it’s immediately followed by profanity-laden protests (to colleagues and family), which somehow, miraculously evolve into polite, obliging replies within ten minutes. Some might call it a skill. I personally liken it to a disability.

The trouble with this approach of course is that it simply elevates expectations to ridiculous levels. And not only does it demonstrate to your client that you’re a complete pushover, but it also suggests to them that you have little else going on. You can bet that agency bigwig isn’t dishing out responses in micro-seconds in the hope of a kind pat on the head or meagre thanks. But there you are, bending over backwards like someone with something to prove, and in the process proving nothing but the fact that you’re an idiot.

The irony here is that this approach to achieving widespread gratitude and universal joy is seldom effective, with those who dish out the silent treatment far more likely to receive praise than the overworked imbecile in the corner. Business you see, is much like dating. Show your hand too soon, and you come across as desperate. Perhaps even a little creepy. But act cagey and aloof, and you’ll have the other person eating out the palm of your hand in no time.

The sad truth is that an overt willingness to do good work is commonly regarded with suspicion rather than appreciation. Clients are used to things a certain way. They’re accustomed to lengthy turnaround times, curt responses and ridiculous systems and processes that turn two-second jobs into epic, month-long to-and-fro exercises. And your eagerness is frankly throwing a spanner in the works. You must want something from them. Or be plotting some grand subterfuge. Whatever it is, it’s unsettling and disconcerting.

Of course you’re not disarming them enough for people not to take advantage of your obliging nature. You’ve demonstrated yourself to be quicker AND cheaper than anyone else your client works with, so it makes perfect sense that you get all the rubbish, emergency jobs. And because you’ve established your own outrageous status quo, there’s no need to thank you for going above and beyond. Yes you worked 74 hours and only charged for 12. But you did that last month too. Too late to complain now.

So how do you break this cycle of self-abuse and take back control of your empire. Here are a few tricks I’ve learnt along the way: