Diaries of a Barefoot Businessman Chapter 20: Expecting the unexpected 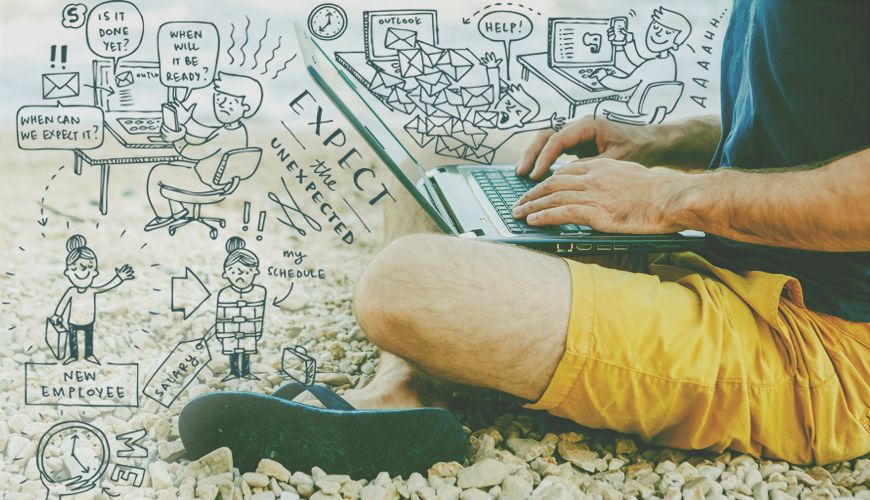 I’m often told by experts and entrepreneurial sages that planning is the key to building a functional business empire. Yet as I sit here with the Monday dawn about to break, I can safely say I have not the faintest clue what the day – let alone the week – will hold.

You see planning is all very well if you work in, say, accounting. Or perhaps rocket science (who really knows what it is those guys do? Is it actually a thing or just a useful occupation to use when mocking someone’s stupidity?). But in today’s dynamic and ever-shifting digital landscape, is planning just a waste of time?

I certainly can’t deny that scanning an eye over my Trello (or Evernote or whatever productivity app might be the flavour of the month) brings me some sense of calm – all those weighty projects look a whole lot less frightening when lined up in neat little rows. And for a few glorious hours every morning, the world looks magically ordered and contained, primed and ready for you to get out there and conquer it.

And then everybody else wakes up.

Like a switch suddenly flicked, the tranquil inbox erupts into a landslide of utter chaos, emails (all of them marked urgent by way of screaming red exclamation marks) flying in from all directions, enlightening you as to the sorry state of humanity on any given day.

Suddenly, all that catching up you did over the weekend is rendered null and void, as an entirely new set of problems emerges, thanks either to enraged consumers or clients who clearly have too much time on their hands and might want to consider a hobby.

Naturally, everyone thinks they deserve first priority. The lady whose cheese was mouldy, the enraged shopper who needs to know whether their purchase is somehow funding international terror syndicates, and the client who suddenly feels the pressing urge to bury themselves in every last morsel of data ever generated by their Facebook page. Like right now.

All the while, your neatly stacked little tasks get pushed further and further down the list, your well laid plans sullied as you slap on a smile and prepare to deal with insufferable people with problems that quite clearly could have waited a day (or forever).

So how do you prioritise the daily debacle that is your inbox? Do you pick your favourite clients and sort them out first? Do you go in order of retainer size? Or do you just ignore the lot of them and get on with what you’d planned in the first place, assigning each issue an immovable place in the queue?

Of course, the latter option is the one favoured by those inclined towards logic, but the problem is that when it comes to people, there’s no such thing. Despite the fact that most purport to respect your time, there are a few choice individuals who tend to utilise every messaging platform available to send you a series of probing question marks and aggressive follow ups, wildly unaware of the fact that your days are not actually spent waiting for their next command.

Perhaps all you need is an extra set of hands to help stem the unyielding tide? A new, bright-eyed employee not yet jaded by the demands of the working world? Now this is a lovely idea in theory, but realistically flawed for two reasons.

Firstly, people want answers from YOU and tend to take unkindly to a response from what might be perceived as an underling. Everyone believes they deserve to hear directly from the boss. Secondly, it’s near impossible to school anyone in the ways of your workflow when you frankly have no idea what’s going on yourself. Apparently ‘just react to whatever’ is not considered a helpful brief (confirmed by numerous parties unimpressed by my scant educational skills).

So now you’re lumped with an extra salary and someone unable to escape from the straitjacket that is your ever-shifting schedule. Awesome.

So how do you go about hanging onto your sanity as the earth keeps moving beneath you? Here are a few tips from the trenches, some executed better than others: