Diaries of a Barefoot Businessman Chapter 19: The Global Domination Dilemma 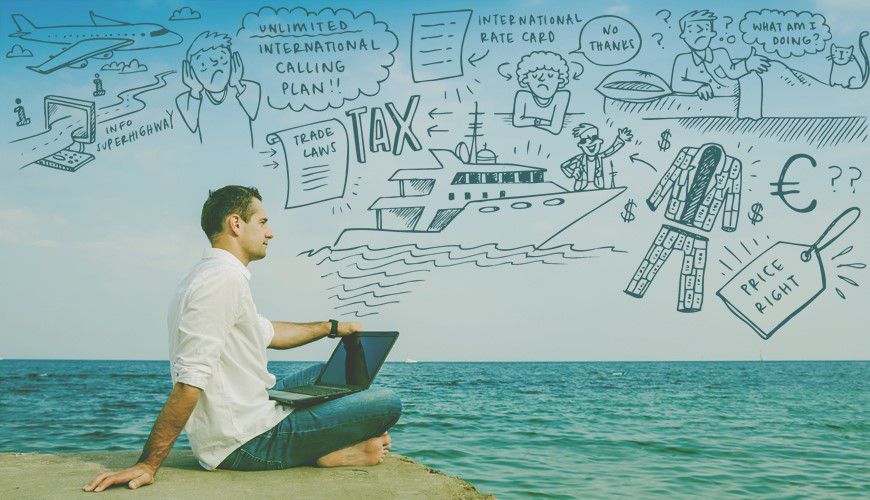 For any aspiring businessman (or woman), the idea of doing business in international waters is wildly alluring. Not only do other countries trade in more inherently valuable currency and boast better attitudes to work/life balance, but they’re also incredibly far away, making the prospect of regular interaction far less likely. Sold!

Given the growing proclivity towards international outsourcing and the increased ease of engagement thanks to our global hyper-connectedness, I figured taking on foreign markets would be a cinch. Put the word out there, and before long I’d be running my empire from a yacht, draped in a suit made of dollars. Hundreds, mind you.

Now the fact that I’m writing this article rather than studying up on the difference between port and starboard probably suggests to you that I might have been overreaching somewhat. But whilst our first foray into foreign waters hasn’t quite yielded the tsunami of riches I envisioned, it hasn’t been altogether unsuccessful. Although suffice to say, it’s somewhat less glamorous than you might think.

So to you wannabe jet-setters and would-be tax evaders, here are just a few commonly held misperceptions about working for an international clientele. You might want to read on before you start fantasy shopping for your own private island.

They have bigger budgets

Ok this one’s going to hurt. You see, whilst international clients tend to dabble in dollars and other more compelling currencies, they generally tend to seek help from further afield only when there’s a squeeze on their bottom line. Yes, sadly, as an international provider, your most compelling benefit is your price tag rather than your stellar global reputation, so don’t expect potential clients to be amused by your ‘international’ rate card.

They’ll stay out of your way

Let me share with you four terrible words that filled my soul with terror when first I heard them: Unlimited International Calling Plan. Yes, this is apparently a thing, and something worryingly easy to acquire for foreign clients taking an active interest in the workings of their account. Yes you might be far away, but escape isn’t as easy as you might think. Add to this the complexity of time zone differences, and you can pretty much wave goodbye to any guarantee of down time.

You’ll be an international jetsetter

Sure. If you want to pay for the trip yourself. Don’t make the mistake of thinking that upon signing a contract with an international client you’ll be on the next plane to visit them in whatever exotic land they might reside. The thing is, international clients don’t actually want to see you, they just want you to get the job done, and preferably at the cheapest rate possible. Sorry folks, but the only international travel you’ll be doing is on the information superhighway.

The internet makes everything simple

Just because it’s easy to send an email across the globe and to instantly connect with someone thousands of miles away doesn’t mean that doing business in other countries is free of complications. Despite what the likes of Zuckerberg might have convinced you to believe, there are still trade laws and regulations to uphold, local tax laws to consider and the complications of international payments to take into account. The bottom line is that by the time you’ve deducted all the various costs and transfer fees and hours of administrative horror, you may wonder why you bothered in the first place.

So before you spread your wings and complicate your life unnecessarily (where do they put the € symbol? WHERE? It’s things like this that can waste entire days of your time), here are a few key tips to bear in mind: