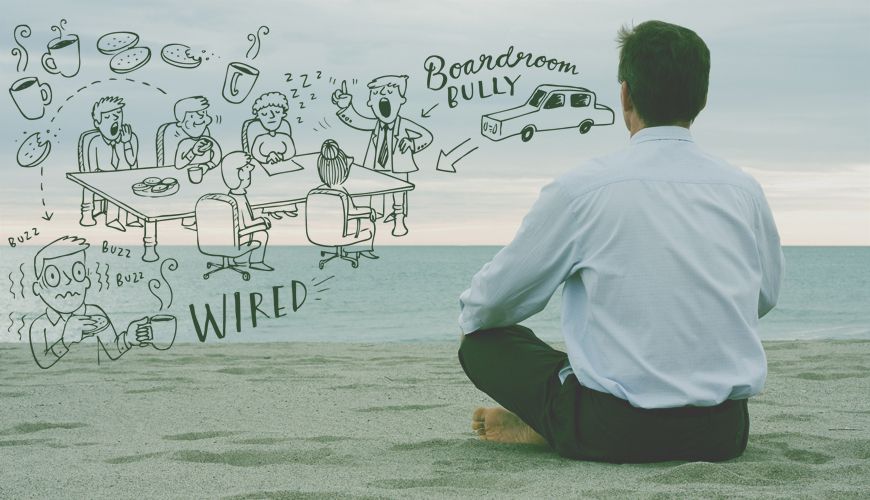 For anyone with a marginally productive disposition, meetings are perhaps the most painful of all professional obligations. Not only do they upset your hard-earned momentum and require a hair-raising venture into rush-hour traffic, but they also expose you to some of the least attractive elements of humanity.

For some reason, the boardroom is a place that seems to bring out the very worst in people, who inexplicably see it as a forum to assert intellectual dominance, and to achieve their daily word allocation in double quick time. For them, it’s more than a meeting – it’s a war, and they’re there to win it.

Now as someone with a fairly reticent approach to meetings (I’m really just there for the coffee and snacks), I’m constantly bemused by the power struggles that seem to regularly erupt around me, as meeting participants attempt to jostle for pole position in the eyes of whomever in the room is paying the bills.

Spewing forth countless opinions and frankly dubious acronyms (which nobody interrogates for fear of appearing foolish), these boardroom bullies rely on a cunning strategy of sheer force, coercing their opponents into either a glazed stupor or a confused state of competitive admiration.

For those like me, whose primary objective is to simply survive meetings without perishing from sheer boredom, this kind of scenario presents a wide variety of challenges. After all, nobody wants to be the mute idiot in the corner getting progressively more wired on caffeine and sugar (why must they put biscuits in the boardroom? Why I ask?).

The temptation of course is to speak up and perhaps undermine your opponent’s assertions from time to time, subtly unseating the balance of power. However, in all likelihood, this will only incite an even more fervent verbal retaliation, thus extending the hideous meeting even further, and making you look a little bit like a sore loser.

At the other end of the fight-or-flight spectrum is dead silence, which, while agreeably comfortable, doesn’t exactly afford you any professional cachet. After all, here your rival is sounding off on anything from politics to social media networking (hey, that’s MY area of expertise!), and you’re sitting with a mouthful of teeth, suggesting either extreme hostility or gob-smacking stupidity. Neither of which is something a client really wants.

At the end of the day though, it’s important to consider what it is your client actually does want. Do they enjoy being interrupted throughout their presentation by the banal bleatings of a would-be intellectual? Probably not. Do they have four hours to spend dissecting every last element of a conversation that should have taken 45 minutes at most? I’m guessing no.

Remember, your clients are human too, and if you’re not buying into the boardroom bluster, it’s likely they’re seeing through it too. Of course they’re trying to look impressed (after all, they’re probably paying this person an exorbitant fee and he’s clearly charging per word), but realistically they’re probably also more concerned about what’s for lunch.

Let’s be real: clients aren’t paying you for your opinions. They’re paying you to execute and validate theirs. You might like to think you’re in control, but the person pulling the purse strings is always in the driver’s seat. And by constantly questioning and second guessing every point they make, you’re actually subtly inferring that they’re a little bit stupid.

At the end of the day, it’s about getting the job done. And done well. Which is difficult to do when you’re so busy talking about it. So, if you’re of a less socially aggressive ilk, don’t be too concerned about limiting your conversational contributions. Everyone else in the room is quietly thanking you.

Here are a few key tips for surviving your next meeting with a boardroom bully: