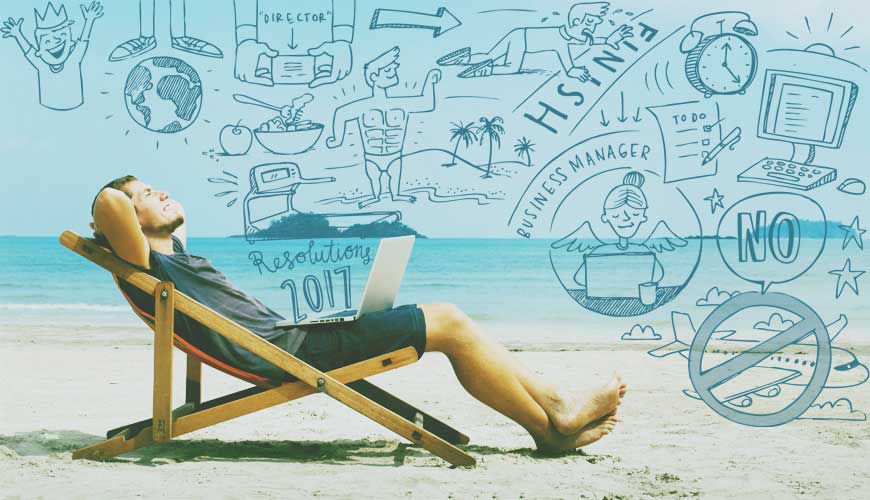 So another year has come and gone, and as tradition dictates, the ringing in of 2017 comes along with a series of promises to do better, be healthier and generally live a more respectable life. Of course, most of these expire approximately 14 hours into the New Year (right around the time you remember just how awful treadmills are), but there’s no harm in trying right?

So besides a beach body that’s blatantly never going to materialise and a vague inclination towards overarching improvement (this has never been clearly defined), what should we be striving for as 2017 hits its stride?

Having spent the past 12 months muddling my way through my business’s infancy, I can safely say I’ve learnt a lot since last January, when I set forth in a blaze of reckless enthusiasm, cheerily emblazoning the word ‘Director’ on my business cards and feeling the world was at my feet.

Now, having limped over the finish line in a relative state of disrepair, it’s time to pass on these learnings, and share some recommendations for fellow entrepreneurs trying to navigate their way through this relentlessly complicated and eternally confusing adventure.

Here, in no particular order, are my 2017 resolutions for you to use or lose as you see fit:

Be the first to wake up

When you work for yourself, it can be awfully tempting to keep hitting that snooze button, secure in the knowledge that you have no place in particular to be. But whilst it may be cold and/or dark and/or the morning after an indulgent night, there’s no excuse for wasting those golden hours before the day kicks off in earnest.

It’s probably safe to say we’ve all started many a day with the very best intentions, only to watch them evaporate in a flurry of unrelenting demands that somehow came to fruition while we were sleeping (how does this happen? HOW?). By getting a jump start to the day and putting a couple of productive hours under your belt before the requests start flying in, you’ll at least be able to make a few minor dents in that ever-expanding to-do list.

Get yourself a business manager

Having fashioned a business from what essentially amounts to one marketable skill, I can safely say that performing tasks well and running an operation are two vastly different things. I can’t tell you the number of times I’ve simply forgotten to invoice a client (a fairly fundamental shortcoming), or accidentally allocated ten times more budget to an advert than what was actually paid to me. And don’t even get me started on tax. I mean what is it all about? I’ve had it explained to me countless times, but my brain just garbles it up and spits it out, resulting in a few fairly terrifying bills from the receiver of revenue.

Basically, being good at what you do isn’t good enough when it comes to running a business. You still need to, you know, get paid and stuff. So rather than being a cheapskate and trying to teach yourself skills that remain wildly outside of your field of aptitude, consider getting yourself a business manager to run the show for you. That way, you can focus on what you’re actually good at while they gently steer the ship in the right direction. It’ll cost more in the short term, but when you consider the fact that you’ll actually be paid regularly by clients as a result, it’s a fairly worthwhile investment.

In 2016, I took 41 flights. That’s almost a flight per week. Now for each and every one of these, I probably lost a good 8 hours to airport transfers, delays, traffic jams and unhinged cab drivers. That’s already more than a month of working hours down the drain. Add to that the undue stress of foreign plug points, shaky internet connections and the inexplicable fact that the word ‘Wifi’ is not universally understood, and you’ve landed yourself in a world of hurt.

By this point, you’re so wired and strung out that you could frankly be sitting in a floating cabana in Bora Bora and you wouldn’t even notice. So yes, by all means utilise your hard-won flexibility to see the world, but don’t do it unless you’ve got the time and the team in place to facilitate it. The more you travel, the more time you need to win back those lost hours, and if the math isn’t on your side, you’ve got a lot of sleepless nights coming your way.

Learn to say no

In the early stages of business, one tends to feel obliged to answer in the affirmative to any request for work. Cue a series of frankly diabolical undertakings, spearheaded by clients whose demands are well above their pay grade, that consume the precious time you could be using to proffer your services to people with actual budgets.

Remember too, that your willingness to service any and all comers does little to bolster your reputation – after all, nobody wants to be known as the bargain bin alternative. So set your standards a little higher and pick your projects more carefully – it’s always scary to turn down work, but if it saps your time without refueling your bank account appropriately, it’s time to walk away.